Look at this lineup for the closing reading at the 3rd Cascadia Poetry Festival. I hope you’ll consider attending and connecting with other poets from Cascadia in this ongoing cultural investigation. See you in Nanaimo! 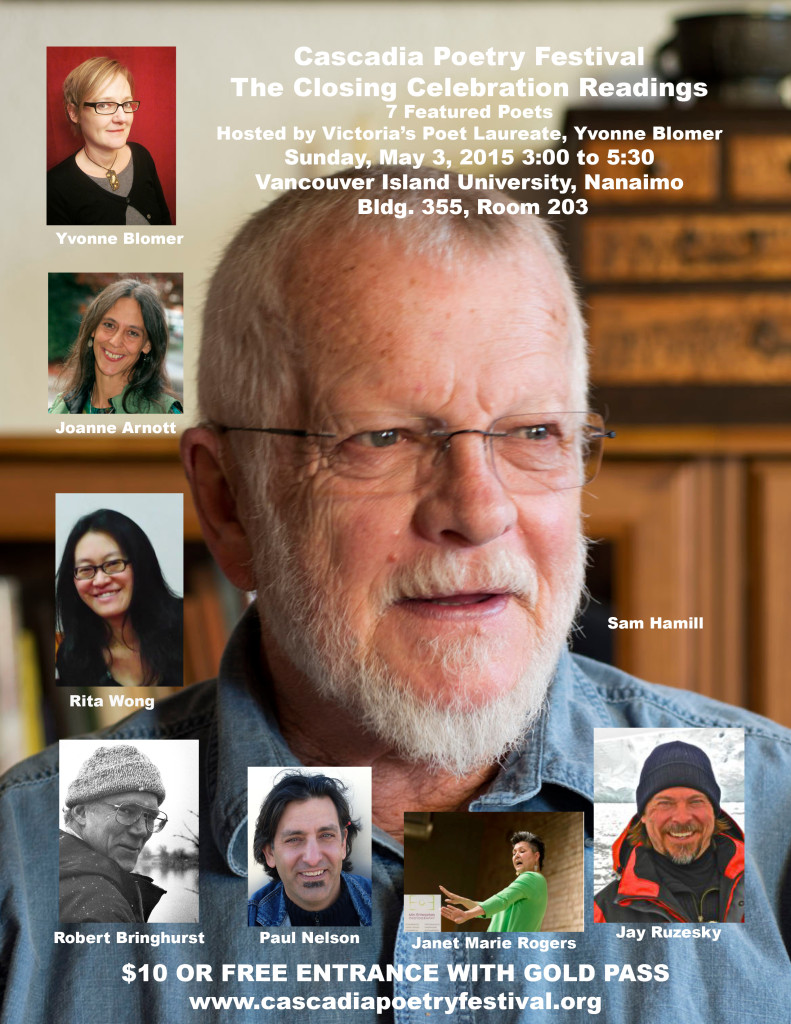 Joanne Arnott is a Canadian Métis/mixed-blood writer & arts activist, originally from Manitoba, at home on the west coast. Her book, Wiles of Girlhood ,won the League of Canadian Poets’ Gerald Lampert Award (1992). She has published essays and poetry in many anthologies, and eight further books, including Halfling spring: an internet romance (Kegedonce, 2014), A Night for the Lady (Ronsdale, 2013), Mother Time (Ronsdale, 2007), and Steepy mountain love poetry (Kegedonce, 2004). Active with the Aboriginal Writers Collective West Coast, The Writers Union of Canada, and The Writers’ Trust, she is a grand multipara, a mentor and a blogger.
Yvonne Blomer was born in Zimbabwe and came to Canada when she was two years old. Her first collection, a broken mirror, fallen leaf, was shortlisted for the Gerald Lampert Memorial Award. Yvonne has also published two chap books Landscapes and Home: Ghazals (Leaf Press, 2011) and Bicycle Brand Journey (JackPine Press, 2012), and is the co-editor of Poems from Planet Earth (Leaf Press, 2013) out of the Planet Earth Poetry reading series, of which she is the Artistic Director. In 2014 her third full collection of poems As if a Raven was released with Palimpsest Press.

Yvonne Blomer was born in Zimbabwe and came to Canada when she was two years old. Her first collection, a broken mirror, fallen leaf, was shortlisted for the Gerald Lampert Memorial Award. Yvonne has also published two chap books Landscapes and Home: Ghazals (Leaf Press, 2011) and Bicycle Brand Journey (JackPine Press, 2012), and is the co-editor of Poems from Planet Earth (Leaf Press, 2013) out of the Planet Earth Poetry reading series, of which she is the Artistic Director. In 2014 her third full collection of poems As if a Raven was released with Palimpsest Press.

Robert Bringhurst is the author of more than thirty books. More than half of these are poetry. He is also known for his studies of Haida and Navajo oral literature, and for his work in the field of typography. His Selected Poems are published by Jonathan Cape, (London). Two volumes of his selected essays and lectures – The Tree of Meaning and Everywhere Being Is Dancing – are published by Counterpoint (Berkeley). Other books include A Story as Sharp as a Knife: The Classical Haida Mythtellers and their World and The Elements of Typographic Style, which is now in its fourth edition and has been translated into ten languages. He lives on Quadra Island, off the British Columbia coast.

Sam Hamill is the author of eighteen volumes of poetry including Habitation: Collected Poems, four collections of literary essays, and some of the most distinguished translations of ancient Chinese and Japanese classics of the last half-century. He is Founding Editor, and for thirty-two years was Editor, at Copper Canyon Press. He taught in prisons for fourteen years and has worked with battered women and children. In 2003, declining an invitation to the White House, he founded Poets Against the War, compiling the largest single-theme poetry anthology in history: 30,000 poems by 26,000 poets. He has been awarded fellowships from the National Endowment for the Arts, the Guggenheim Foundation, the Woodrow Wilson Foundation, the Mellon Fund, and the Japan-U.S. Friendship Commission. His work has been translated into a dozen languages. He lives in Anacortes, Washington.

Janet Marie Rogers is a Mohawk/Tuscarora writer from the Six Nations band in southern Ontario. She was born in Vancouver British Columbia and has been living on the traditional lands of the Coast Salish people (Victoria, British Columbia) since 1994. Janet works in the genres of poetry, spoken word performance poetry, video poetry and recorded poetry with music and script writing. Janet has three published poetry collections to date; Splitting the Heart, Ekstasis Editions 2007, Red Erotic, OjistahPublishing 2010, Unearthed, Leaf Press 2011. Her newest collection Peace in Duress will be released with Talon Books in September 2014. Her poetry CDs Firewater 2009, Got Your Back 2012 and 6 Directions 2013 all received nominations for Best Spoken Word Recording at the Canadian Aboriginal Music Awards, the Aboriginal Peoples Choice Music Awards and the Native American Music Awards. You can hear Janet on the radio as she hosts Native Waves Radio on CFUV fm and Tribal Clefs on CBC radio one fm in Victoria BC. http://soundcloud.com/janet- marie-rogers

Jay Ruzesky’s fiction, poetry, and non-fiction has been published in Canada and internationally and translated into Spanish, Portuguese, and Russian. His previous books include Blue Himalayan Poppies, Painting the Yellow House Blue, and Am I Glad To See You. His first novel, The Wolsenburg Clock, was shortlisted for the City of Victoria Butler Book Prize and a ReLit Award. He has been on the editorial board of The Malahat Review for over twenty years and is co-founder of Outlaw Editions. He teaches English, Film Studies, and Creative Writing at Vancouver Island University and lives on Vancouver Island.

Rita Wong is the author of three books of poetry: sybil unrest (co-written with Larissa Lai, Line Books, 2008), forage (Nightwood 2007, winner of Canada Reads Poetry 2011), and monkeypuzzle (Press Gang 1998). She lives on the unceded Coast Salish territories otherwise known as Vancouver, where her work investigates the relationships between contemporary poetics, social justice, ecology, and decolonization. Wong’s poems have appeared in anthologies such as Regreen: New Canadian Ecological Poetry; Prismatic Publics: Innovative Canadian Women’s Poetry and Poetics; The Harbrace Anthology of Poetry; Making a Difference: Canadian Multicultural Literature; and more. Her poem “J28” for IdleNoMore can be found in the journal Decolonization: Indigeneity, Education and Society: http://decolonization.wordpress.com. She has received the Asian Canadian Writers Workshop Emerging Writer Award and the Dorothy Livesay Poetry Prize.