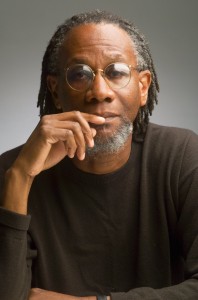 Former SPLAB Visiting Poet Nate Mackey is back in Seattle for two events. Wednesday, September 30, he’s at the University of Washington to speak “On Breath and Precarity”

Nathaniel Mackey is a nationally renowned poet, novelist, editor, and critic known for groundbreaking critical works, including Discrepant Engagement: Dissonance, Cross-Culturality, and Experimental Writing (1993). He has published six books of poetry, includingBlue Fasa (2015), Nod House (2011), and Splay Anthem (2006), which won the National Book Award for Poetry. He has completed four volumes in his ongoing prose project From a Broken Bottle Traces of Perfume Still Emanate (1986-2008). His work employs serial composition and improvisatory modes and draws inspiration from music and Black Mountain (or New American) and Caribbean writers.
Nathaniel Mackey is the Reynolds Price Professor of Creative Writing at Duke University. His distinguished career has earned him multiple awards, including the Stephen Henderson Award from the African American Literature and Culture Society (2008), a Guggenheim Fellowship (2010), the Ruth Lilly Poetry Prize for lifetime achievement from the Poetry Foundation (2014), and Yale University’s Bollingen Prize for American Poetry (2015).