On September 24th 2011, poets gathered (at SPLAB) & in 450 cities around the world in an event called 100 Thousand Poets for Change. The event is designed to change how we see global community and work to cure symptoms of a world that, in Gary Snyder’s words, is “upside down.” 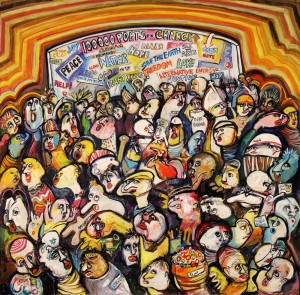 Seattle’s venue for 100 Thousand Poets for Change was SPLAB in Columbia City and the featured poet was Suquamish native Cedar Sigo. After growing up on the Port Madison Indian Reservation across the Sound from Seattle, he attended Naropa University on a scholarship and now lives in San Francisco. His new book is published by the famed City Lights and is entitled Stranger in Town. SPLAB Presents for the week of September 12. For the week of September 19th. The entire interview can be downloaded here.