SPLAB (now Cascadia Poetics LAB) was founded December 14, 1993 (with a different name) in Auburn, WA, by Paul E Nelson, with the mission of creating a weekly, syndicated radio public affairs interview program that aired, at the height of syndication, on 18 stations weekly, including KING-FM, KMTT-FM, the Mountain, KZOK, KJR AM & FM, and stations in Bellingham, Portland & Victoria, BC. We’ve created over 600 hours of interview programming, much of which is online at AmericanProphets.org. See also www.splab.org/listen

Our archives were donated to the White River Valley Museum in Auburn in 2018. The book “American Prophets” was published for our 25th anniversary. It features interviews conducted by Founding Director Paul E Nelson, with: 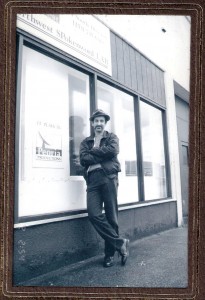 The SPLAB literary project was launched in 1996 in Auburn in an old livery stable at 14 S. Division and lasted until 2004. See this memoir of that time by Paul’s oldest daughter Rebecca Nelson. SPLAB at that time was known as the SPokenword LAB – hence SPLAB.

In 2009 SPLAB moved to Seattle, pivoted to a total literary arts focus and opened a space in Columbia City (2010-2012.) In 2012 SPLAB produced the first Cascadia Poetry Festival & started a 20 year bioregional cultural investigation of Cascadia. We produced Cascadia Poetry Festivals in 2014 and 2016 in Seattle, 2015 with Wordstorm in Nanaimo, BC, 2017 in Tacoma and 2019 in Anacortes.

In 2007 SPLAB created the Poetry Postcard Fest. 2021 marked the 15th year of a project (which in 2021) involved over 519 poets from all over the world sending original poems on postcards to other poets. The anthology 56 Days of August: Poetry Postcards was published in 2017.

Paul E Nelson is a poet/interviewer who serves as Literary Executor for the late Sam Hamill, poet, translator, editor and Founder of Copper Canyon Press.