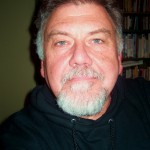 Greg Watson has lived in King County for 33 years, working the last ten as a teacher in alternative high school programs on and off the Muckleshoot Reservation. He has a longstanding connection with Native American people and cultures in the Puget Sound area as a friend, a student of the late Vi Hilbert, and as a museum professional. His many obsessions include carving, Puget Sound Salish (Lushootseed/Whulshootseed) literature, and the work of Anthropological pioneer Arthur C. Ballard (1876-1962).

Greg Watson’s performance at 7PM will be a workshop: Si’i’ahb – Noble People: Key words in Puget Sound Salish and the power they carry. It will happen in the Doe Bay Cafe.


This session is not a class to learn language or spirituality, but a chance to consider how even a few words can carry strong and subtle cultural messages that we can incorporate into creative writing. We will explore Whulshootseed words like Si’i’ahb, es’istuh (same as), directional terms and nouns with multiple meanings (like shugwthl, which means road and door), along with their pronunciations and un-exact spellings with the English alphabet. Hearing Salish literature in translation and some time with the Whulshootsed dictionary are near certainties.