The SPLAB Visiting Poet Series welcomed Nathaniel Mackey to Seattle March 11 and 12, 2011, for a 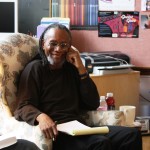 prose reading and conversation, a workshop and a poetry reading. For many reasons, this event set a new high water mark for SPLAB.

Mackey was the 2nd Visiting Poet to read for SPLAB since we moved from Auburn, Washington to Seattle’s Columbia City neighborhood in 2009. Michael McClure visited in March 2010. The year of intense networking since then has paid off.

The prose reading on Friday night happened at the Northwest African-American Museum. Mackey’s first reading in Seattle since 1994, it was co-sponsored by the CD Forum. Their mission: To present and produce Black cultural programs that encourage thought and debate for the greater Seattle area. CD Forum suggested the format, an interview session and Q & A following the reading. The interview was conducted by University of Washington-Bothell professor Jeanne Heuving. Mackey read from the new epistolary novel: From a Broken Bottle Traces of Perfume Still Emanate. Mackey’s letters from N to a mysterious figure known as the Angel of Dust relate the experiences of a jazz band in Southern California in the late 70’s and early 80’s. A work in progress, Heuving combined the insight of a very serious scholar, with a very personable touch, engaging the audience. 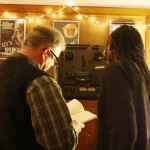 Saturday’s events brought the first Visiting Poet event to the new SPLAB space in the former Columbia School’s Cultural Corner. The workshop was at capacity and Mackey gave some introductory notes, suggesting a different approach to looking at the poems. He suggested we consider “incident vs. narrative” and said he was interested in the “vivification of incident.” He also suggested that gathered poets consider the “sound/sense ratio” of poems. His grace and warm presence allowed for intensity, and his insights, often delivered at the end of the feedback for each poet, was very incisive. Post-workshop comments from participants were extremely 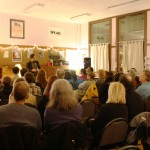 His reading Saturday night lasted approximately 50 minutes and included work from his 2006 National Book Award winner Splay Anthem, as well as work to be published by New Directions in the Fall from the collection entitled Nod House. New work, from an as yet untitled collection, was also read. The two threads of his ongoing serial poem, entitled Mu and Song of the Andoumboulou, are continued into these as yet un-published works. The Andoumboulou, as Mackey points on in Splay Anthem, are the rough draft human beings from the Dogon culture of Mali in West Africa. Lines such as “each the other’s increment” and “star wobble gave us away” give one a sense of Mackey’s reach, from the intimate and indigenous to the galactic. 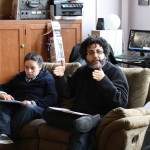 The most recent work featured poems entitled A Night in Jaipur and Moment’s Gnosis, the latter a play on the classic Oliver Nelson jazz composition Moments Notice. When asked at the post-reading gathering why the recent look to the east, he suggested it is part of growing old and the east’s notion of impermanence is central to this new thrust in his work

In an interview conducted during his visit, he downplayed the notion that what he is doing is an example of what Robert Duncan called the World Poem. Duncan’s examples are The Cantos of Ezra Pound, Paterson by William Carlos Williams and H.D.’s Trilogy. In describing Duncan’s concept in his book of essays and interviews, Paracritical Hinge, Mackey says

It is though the war were some sort of muse – a taunting muse, to be sure, but a muse nonetheless. A challenge and a dialectical goad, it elicits acts of the imagination that envision its abolition…The ordeals of hell give birth to a new vision of heaven

He goes on to suggest Williams was writing about this view advanced in 1941 in a piece entitled “Midas: A Proposal for a Magazine” in which  he calls for a flurry of artistic activity to combat the war then raging in Europe. “The Midas touch, the alchemy of the mind which cannot be seduced by political urgencies.”

It is especially clear Mackey’s great antiwar effort, more properly a pro-peace effort in this innovative literary tradition, is what we are seeing in his latest work. There is no mistaking the title of two sections of Nod House when he tells us it is Quag. Two quags in one book to go with the two endless violent occupations the U.S. continues to engage in which exemplify the notion of a quagmire, a term first used in connection with what the Vietnamese call The American War. Far from being a non-political poet, in this tradition, Mackey emerges as the leading current exemplar of this stance toward poem making, illustrating a better use of the poet’s life energy, in the Duncan tradition where “Poetry’s function is not to oppose evil, but to imagine it.”

The visit leveraged contributions from local and regional arts funding agencies, as well as community contributions of lodging and meals. The first grant leveraged served to act as catalyst for the rest of the contributions and that came from Poets & Writers. Grants from 4Culture, the Seattle Office of Arts and Cultural Affairs and WESTAF, along with contributions from the CD Forum, the Shirley Marvin Hotel, Island Soul Caribbean Restaurant, Subud Greater Seattle, Jim O’Halloran, Splab volunteers and Board Members and LEMS Bookstore were also key. 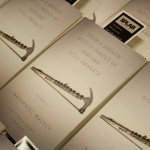 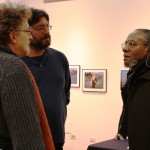 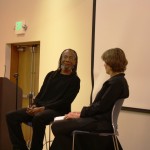