A bilingual reading of contemporary Chinese poetry happens this Thursday, September 29, 2011 at the Seattle Asian Art Museum, in the Stimson Auditorium at 7:00p. Admission is free and poets Xi Chuan and Zhou Zan visit from China to take part in this exchange. 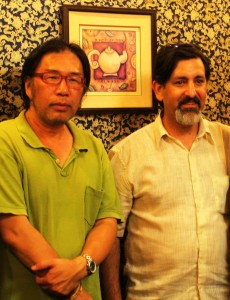 I had the good fortune to meet Xi Chuan in Xining, Qinghai province and he gave me a copy of his Notes on the Mosquito: Selected Poems. In the work I found intelligence, irreverence and some interesting phrases that come at life from a different angle than the typical American might expect. An example:

The beast, it despises my hairstyle, despises my scent, despises my repentance and reserve. In a word, it despises that I doll up happiness in baubles and jewels. IT squeeze its way into my room, orders me to stand in the corner, and with no word of explanation collapses in my chair, shatters my mirror, shreds up my curtains and all that belongs to my spiritual defence. I beseech it: “Don’t take my teacup when I’m thirsty!” Right there it digs up a spring, which I suppose must be some kind of response.

This notion of a spiritual defense fascinates me and I’d hope to interview him while he is in town and ask him what goes in to his spiritual defense and what might he be defending himself from. Other than a traditional Christian view and their notion of the devil, which is not Xi Chuan’s tradition, what would make up an entity for which one must create a spiritual defense? Oh, I have a few ideas on this, but it’s his line,so he gets to answer.

Bio: Xi Chuan (1963), poet, leading representative of the so-called ‘intellectual poets’. Has published numerous collections of poems and has been active as a journal editor and a translator of Pound, Borges and Milosz. His work has been translated in numerous languages and has earned him awards in China and abroad.