I pulled this from the SUNY Buffalo listserv from Rob McLennan:

I will be blogging soon at The Capilano Review blog, alongside
Lisa Robertson, Pauline Butling + George Bowering. 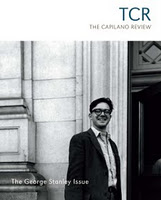 Seeing Rob’s email reminded me that I had ordered my copy of the latest edition of the Capilano Review, as it has a feature on George Stanley, and happened to be reading it just yesterday. Stanley was a San Francisco poet who ended up in Vancouver, along with Robin Blaser and Stan Persky, in the mid 60s. The issue begins with an interview that Brook Houglum and Jenny Penberthy conducted with George. They asked him about that scene in the late 50’s that was centered around Jack Spicer and Robert Duncan, but also featured Kenneth Rexroth and Josephine Miles. He became close friends with Joanne Kyger. The interviewers get into how those in the Spicer circle were not really connected to the Beat poets in SF at the time, but were aware of what the Beats were doing and that the Beats were more connected to Asian culture than the Spicer-ites.

In Vancouver he connected with Fred Wah, Daphne Marlatt, Lionel Kearns, Sharon Thesen and others, and lived with George and Angela Bowering, so he always seemed to find himself among quality poets. The interview is well done and is a compelling read.

There are several new poems from a series in the edition called After Desire  and one of them is:

The Phantoms Have Gone Away

The phantoms have gone away
& left a space
for beauty.

And the freedom from desire
leaves a stillness, a moment
when you believe.

This is that moment.
Visions of beauty
in an unfamiliar stillness.

They can be spoken to,
called by name.

Desire will not drag
them home.

George Stanley is one of the pure poets who has really embodied the culture of Cascadia. The Capilano Review proves once again it is one of the top two or three “little magazines” in this neck of the world and is well worth your $14.