SPLACtory and other Collective Ideas

A large group of poets committed to seeing SPLAB continue as a Collective came out for the 1.31.12 Living Room. Paul Nelson facilitated and, after announcements and introductions, read Paul Hunter’s

Jesse Mikert read a poem (ironically) called Poetry as Therapy and hoped that the Living Room critique circle would continue. He also said that having some understanding of Seattle poetry history is important and told a story about Stephen Thomas’ Cabaret Hegel and specifically one event in which everyone was given a spray can and a chance to mark the whole space with graffiti before the building was to be condemned and torn down. Jesse told in great detail about the “toxic fog” that drove him and Joan Rabinowitz out of the place.

Raanan David feels that SPLAB is a community thing and though he did not “read all the books you guys did in college” he has felt welcome, learned a lot and wants to be the videographer for the SPAB collective.

Lisa Fusch Krasue suggested that we show on-line the evolution of poems based on SPLAB feedback, as that is one of the more remarkable processes that happens to her because of SPLAB. That SPAB’s main gift is the “fully-baked” poems that come out of Living Room.

Greg Bem suggested that content is the key, that friends are the key to any art movements. He feels SPLAB should have events outside Columbia City and that the Claustrophobia reading curated by Rachel Hug and Graham Isaac is a good model. He wanted to know where the young people were at with SPLAB events.

Alex Bleecker spoke about how the Breadline reading series would not have happened without SPLAB and that talk is cheap. He is committed to his turn in the Living Room facilitator rotation, as is his Breadline brother Jeremy Springsteed, but people have to step up. (He says the New Yorker in him compelled him to be pessimistic.)

Laura Wachs said she thinks the critique function of the Living Room is cool.

Evan Peterson wanted to know what made SPLAB different from the Hugo House and the notion of experimentation (hence the LAB part of SPLAB), the poetry emphasis, the low cot of all events and the drop-in critique were cited as differentiating features.

Jonda Barton loves coming to listen and hear how people critique poems. It makes her think about her own writing process. She loves hearing the transition from workshop to finished product in performance at The Breadline and the sense of community is something she appreciates. She’s “one of the gang.”

But kudos go to Aaron Kokorowski who was no doubt the most prepared, suggesting SPLAB adapt Andy Warhol’s Factory concept and become a SPLAC-tory. A Seattle native, he’s seen what Seattle has come up with and said Grunge is about it. His quote: Let’s put something real on the board.

Tuesday March 13, 2012 at 7P, the format will be the same: Come with a short poem to read and come to say how you’d like to see SPLAB continue. The deadline is June 2 for solidifying involvement in the SPLAB 2012/2013 season which would start in September 2012. 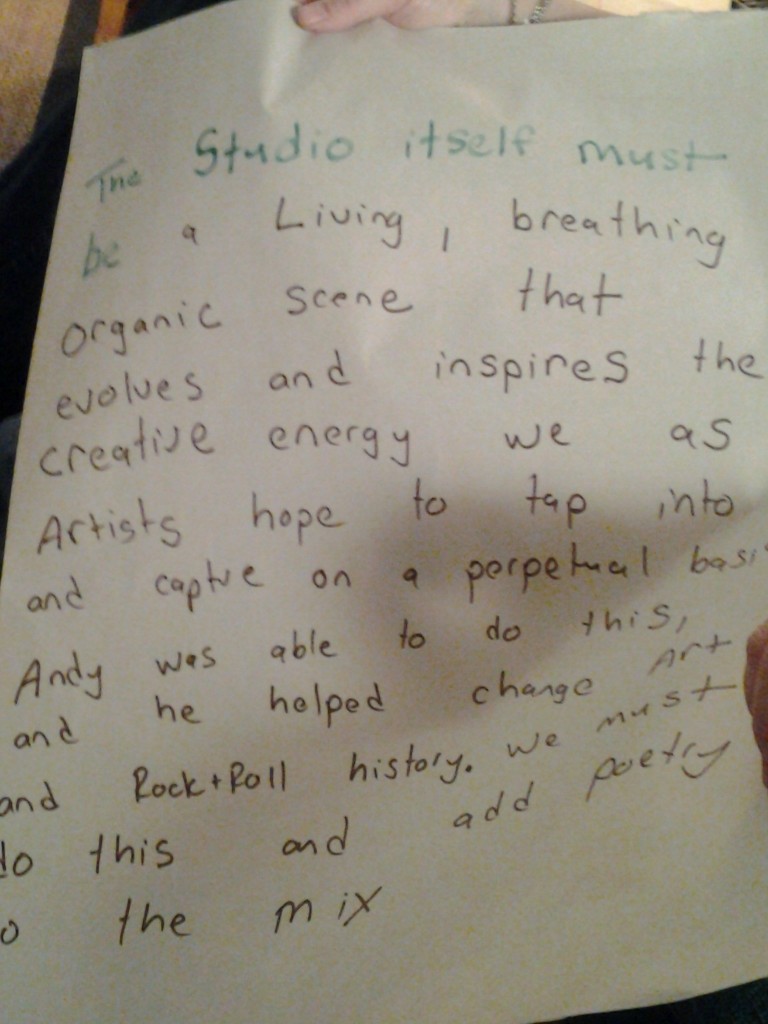 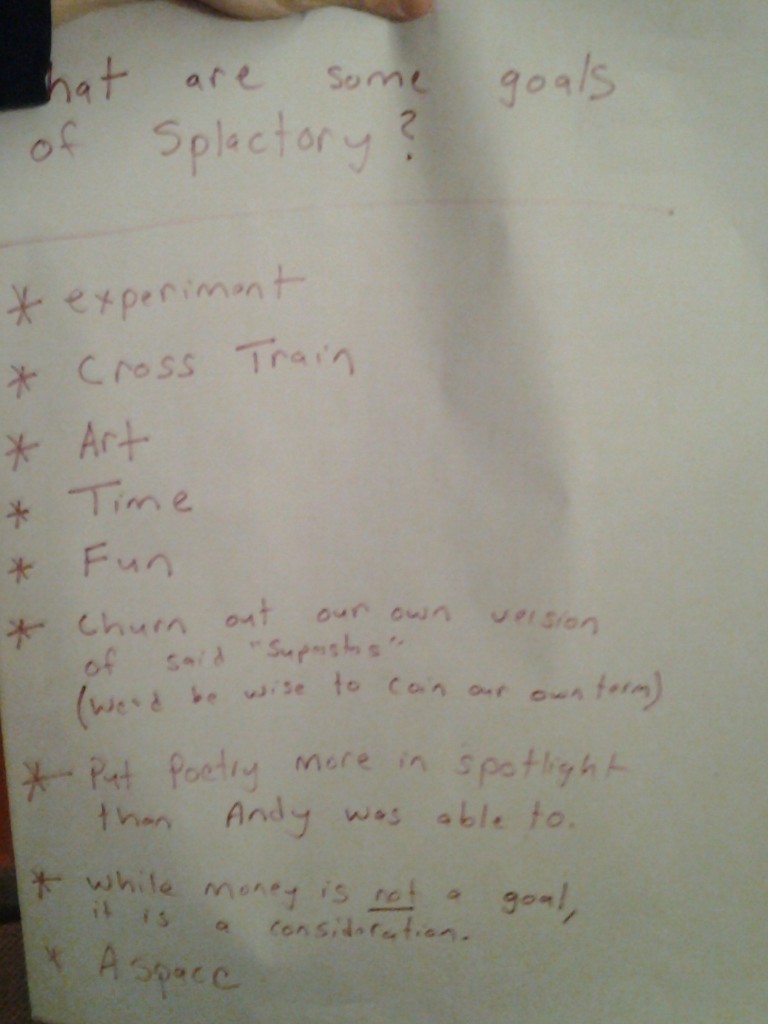 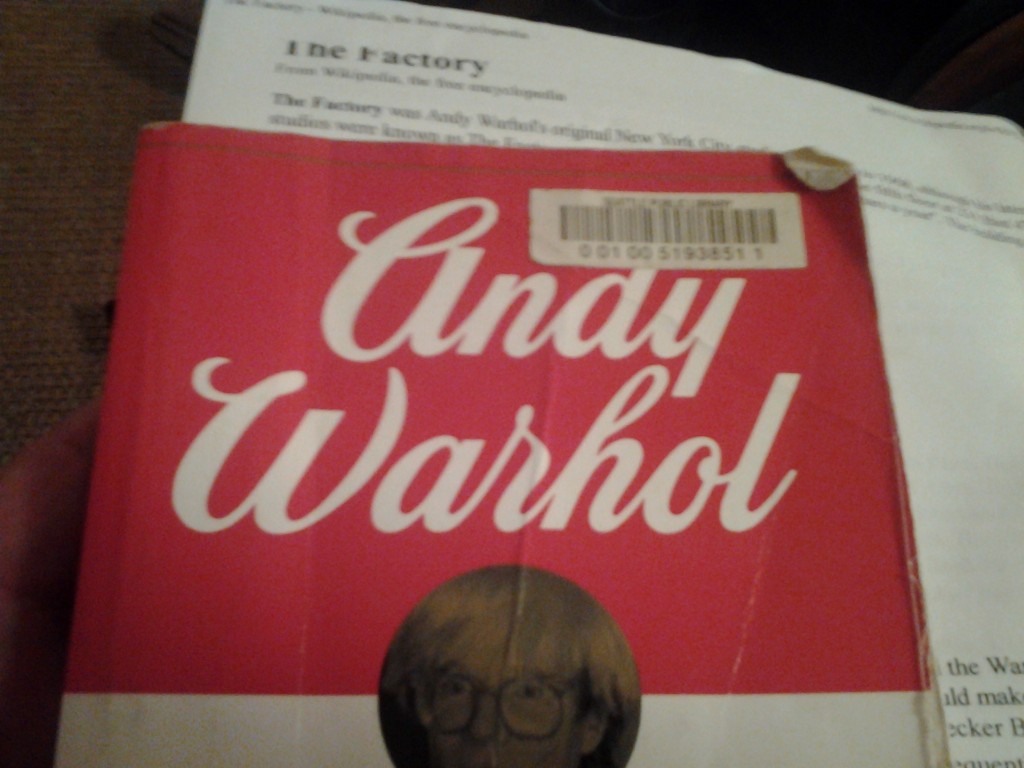 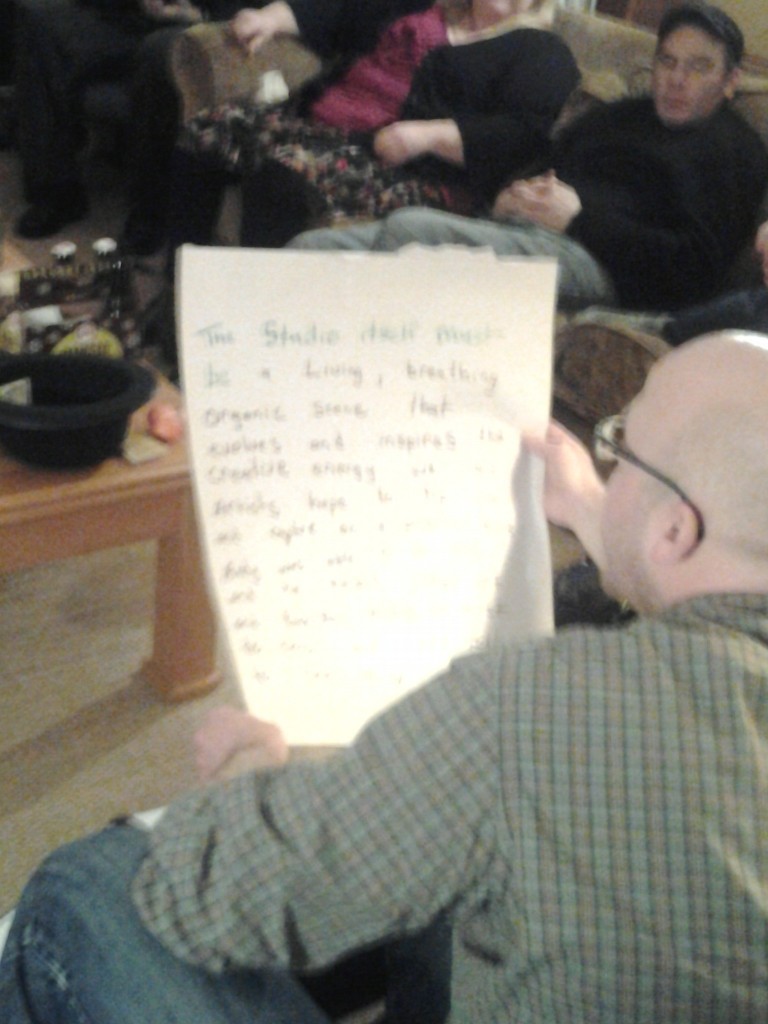