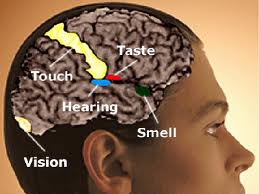 Synesthesia is a neurologically based condition in which stimulation of one sensory or cognitive pathway leads to automatic and involuntary experiences in a second sensory or cognitive pathway.  We are not talking about constructing clever metaphors here, for these “afflicted” the effect is automatic and consistent (and not deliberate, delusional or the result of schizophrenia).   One common form of synethesia is visual motion to sound synesthesia.  This involves sounds being heard in response to visual motions or flickers. Another form is Grapheme to color synesthesia during which letters and numbers are perceived to be inherently colored.  Interestingly, synthestes from different cultures note similar colors inherent in certain numbers; for example, the numbers 3, 6 and 9 are often generated from and seen the warm and hot red spectrum.  2, 4 and 8 are often formed from cooler, blue ranges.

Tuesday night facilitator Joe Chiveney and participants will be exploring a condition called Ordinal Linguistic Personification. This is a form of synesthesia where for those “afflicted,” numbers, days of the week and months are associated with inherent personalities. Here are some examples from an 1893 study:

“T’s are generally crabbed, ungenerous creatures. U is a soulless sort of thing. 4 is honest, but… 3 I cannot trust… 9 is dark, a gentleman, tall and graceful, but politic under his suavity.”

Another subject from the same 1893 study noted that:

“I [is] a bit of a worrier at times, although easy-going; J [is] male; appearing jocular, but with strength of character; K [is] female; quiet, responsible….” February is “an introverted female”, while F is a “[male] dodgy geezer”. Similarly, May is reported to be “soft-spoken” and “girly” while M is an “old lady [who] natter[s] a lot”, and while August is “a boy among girls”, A is a female “mother type”

And another from the same 1893 study:

“1, 2, 3 are children without fixed personalities; they play together. 4 is a good peaceful woman, absorbed by down-to-earth occupations and who takes pleasure in them. 5 is a young man, ordinary and common in his tastes and appearance, but extravagant and self-centered. 6 is a young man of 16 or 17, very well brought up, polite, gentle, agreeable in appearance, and with upstanding tastes; average intelligence; orphan. 7 is a bad sort, although brought up well; spiritual, extravagant, gay, likeable; capable of very good actions on occasion; very generous. 8 is a very dignified lady, who acts appropriately, and who is linked with 7 and has much influence on him. She is the wife of 9. 9 is the husband of Mme. 8. He is self-centred, maniacal, selfish, thinks only about himself, is grumpy, endlessly reproaching his wife for one thing or another; telling her, for example, that he would have been better to have married a 9, since between them they would have made 18 – as opposed to only 17 with her… 10, and the other remaining numerals, have no personifications”.

…
Tuesday night we will explore our inner synesthete with a writing exercise designed to invoke us involuntary, activate us automatically while simultaneously and soberly scrambling what senses we thought we had.  Bring your egg whisks, pen and paper and be willing to question some seemingly common words about their hidden personas.