Levertov Plaque To Be Unveiled Dec 3

MEMORIAL PLAQUE FOR DENISE LEVERTOV TO BE UNVEILED

Seattle, WA, November 25, 2016 — A plaque to honor the memory of internationally-renowned poet Denise Levertov will be unveiled in a ceremony at 10am, Saturday, December 3, 2016, at her former Seattle home, 5535 Seward Park Avenue S.

The memorial is being presented by SPLAB (Seattle Poetics LAB) and the Rainier Valley Rotary, the two organizations who helped raise funds for the plaque. Longtime Levertov friend and University of Washington Professor Emeritus Colleen McElroy is scheduled to attend and address the gathered.

SPLAB Founder Paul Nelson said today, “Denise Levertov was one of the most gifted poets to ever call Seattle home. That there is no public acknowledgment of that is an oversight we felt needed correction. Thanks to the Rotary’s efforts and to the crowdfunding campaign that included some of her longtime friends and fans, this beautiful plaque will inform the generations to come that Levertov lived here, in Seward Park, where she wrote some of the best poems ever written about Mt. Rainier. We honor her life and achievement.”

Levertov lived at the home the last eight years of her life, until her death, December 20, 1997.  In her storied career, she published over thirty books of poems, essays and translations and her work clarifying the open form approach she called Organic Poetry was a huge influence on post-World War II North American poets. Her work and legacy was the subject of a tribute at the recent Cascadia Poetry Festival produced by SPLAB. 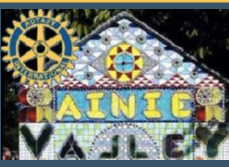