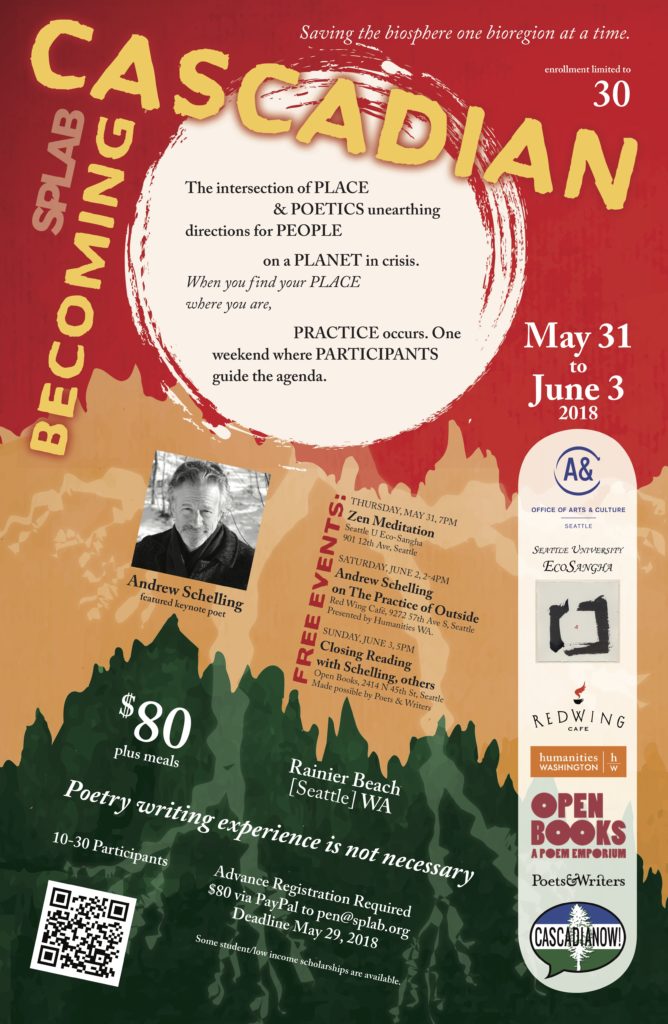 The retreat we have been planning for a few months happens in two weeks. Becoming Cascadian was a response to the desire by the SPLAB Board to continue events that operate at the intersection of poetics and bioregionalism, but do not require the kind of budgets as the festival model, which we had done with six different iterations of the Cascadia Poetry Festival.

Bioregionalism is an approach to life that is a reframing of how we define PLACE and how we act upon that new angle of definition. The man most responsible for fomenting the concept is the late Peter Berg (founder of the Planet Drum Foundation and he suggested tenets of bioregionalism include:

3. support the work of reinhabitation.

The latter is accomplished through proactive projects, employment and education, as well as by engaging in protests against the destruction of natural elements in a life-place . . .

April was Earth’s 400th warmer-than-normal month in a row
Anyone born after February 1985 has never experienced a “cool” month for Earth, let alone a normal one.

And the vast split between rich and poor in the United States, and add Fred Moten’s notion (in the New Yorker) that we should be studying:

. . . to gather with friends and talk about whatever you want to talk about, to have a barbecue or a dance—all forms of unrestricted sociality that they slyly call “study.” . . . (In a recent book) Moten explains the idea.

We are committed to the idea that study is what you do with other people. It’s talking and walking around with other people, working, dancing, suffering, some irreducible convergence of all three, held under the name of speculative practice. The notion of a rehearsal—being in a kind of workshop, playing in a band, in a jam session, or old men sitting on a porch, or people working together in a factory—there are these various modes of activity. The point of calling it “study” is to mark that the incessant and irreversible intellectuality of these activities is already present.

Moten maintains that this kind of open-ended approach can be brought to bear everywhere, and can address even those subjects that might seem most traditionally academic.

and you have more proof that the urgency exists beyond all doubt. Poetry is what SPLAB is dedicated to and the W.H. Auden quote is key at this time:

For poetry makes nothing happen: it survives
In the valley of its making where executives
Would never want to tamper, flows on south
From ranches of isolation and the busy griefs,
Raw towns that we believe and die in; it survives,
A way of happening, a mouth . . .

Mallarme said: “poetry is the language of a state of crisis.”

Our event in two weeks seeks to gather poets and those interested in ways of existing in this time of whole systems transition. We believe in poetry’s power to transform people and situations. Won’t you join us? For information email Splabman@gmail.com or call SPLAB at (206) 422.5002 and secure your spot. The registration has been limited to 30 people and some slots remain open.