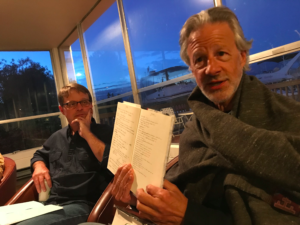 Andrew Schelling shows off his notebook while Jared Leising looks on

The Cascadia Poetics Lab is proud to support Poems for Peace, an initiative of the Subud International Cultural Association. Poet Andrew Schelling, a longtime friend of the Cascadia Poetics LAB will be the featured poet, will talk about the link between poetry and peace and read some of his work on Thursday, October 21 at 11am PDT. The promo video can be watched here:

Andrew Schelling is a poet, translator of Sanskrit, Pali and other old India languages, an essayist and for the past 30 years a teacher at Naropa Univeristy in Boulder, Colodaro where he teaches poetry in the Jack Kerouac School of Disembodied Poetics and Sanskrit for the Religious Studies program. . Along with being a poet and translator, Schelling is an ecologist and naturalist, having travelled extensively in North America, Europe, India, and the Himalayas. Schelling’s poetry collections include A Possible Bag (Singing Horse Press, 2013), From the Arapaho Songbook (La Alameda Press, 2011), Old Tale Road (Empty Bowl Press, 2008), Tea Shack Interior: New & Selected Poetry (Talisman House, 2002), The Road to Ocosingo (Smokeproof Press, 1998), and Old Growth: Poems and Notebooks 1986-1994 (Rodent Press, 1995). He is also the author of Wild Form, Savage Grammar: Poetry, Ecology, Asia (La Alameda Press, 2003). In 1992, Schelling received the Harold Morton Landon Translation Award from the Academy of American Poets for Dropping the Bow: Poems of Ancient India (Broken Moon Press, 1991). His volumes of translation also include For Love of the Dark One: Songs of Mirabai (Shambhala Publishers, 1993) and The Cane Groves of Narmada River: Erotic Poems of Old India (City Light Books, 1998). Schelling has received two grants for translation from the Witter Bynner Foundation for Poetry.