People in the rest of the U.S. and in Europe have difficulty in adjusting to the fact that the Pacific Coast of America faces the Far East, culturally as well as geographically… The residents of California, Oregon, and Washington are as likely to travel across the Pacific as across the continent and the Atlantic.

What does it mean to be a West Coast poet? Or to broaden the view, a Pacific Rim poet? In this course, we’ll explore innovative (& classic) Pacific Rim poetics. Basho’s Haibun, Sei Shonagon’s list poems, the serial poems of Jack Spicer, Nathaniel Mackey and Robin Blaser and Lissa Wolsak’s phosphorus of the mystery. Class time will be given to readings (& listenings) of work, as well as writing exercises and discussion. Get a better understanding of your place as a poet in this corner of the world. 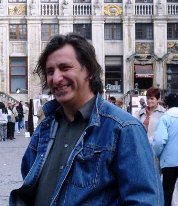 University. Shortlisted for the Stranger Genius Award in Literature, 2010.