On August 5 Meredith and I left for Beijing and after a one-night stop there, we were dropped in to an international “City of Poets” to use C.A. Conrad’s phrase. This was in Xining at the Qinghai Hotel. All my expenses were covered and Meredith only had to cover her plane fare for this journey and that’s just the first example of the considerable generosity with which China treats poets.

It helps to have a high ranking Government official who is a poet. This is the Director for the Qinghai Provice Department of Information, Jidi Majia, the visionary behind this conference: 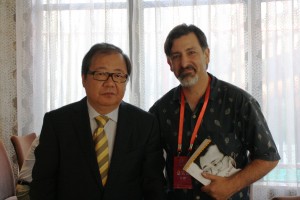 Jidi is a poet who came from the Nuosu people of SW China. That’s me holding a copy of his book of poems translated into English by our guide, Denis Mair: 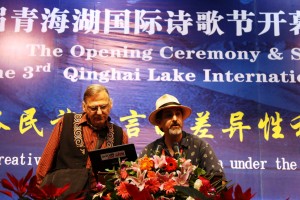 Denis had to almost translate on the fly the short version of my essay on Pacific Rim Poetics but did a wonderful job, though our presentation went about 19 minutes. (The long version of the essay is here.)

Among the inspiring poets I have met here are: Jami Proctor, who has a wonderful sense of humor, is a fine poet who studied with Brenda Hillman, speaks Mandarin and was one of the people who translated into English at some conference events. 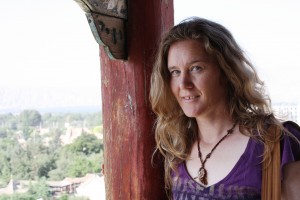 Javier Bello, from Santiago, Chile, has a wicked sense of humor and hit it off with Meredith right away. I told him about C.A. Conrad and thought he would like his work a lot.  Jose Kozer calls him a true poet. 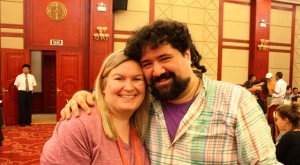 Xi Chuang was one of several people who enjoyed my presentation and he gave me a copy of the galley for his new book Notes on the Mosquito to be published in English by New Directions. He’ll be in Seattle in late September. Mai Mung teaches at Connecticut College and did a presentation: In Search of the Absolutely Blind Encounter which was very thought-provoking. Sun Xiaoya teaches at Peking University and read the Chinese version of Elegies for Slaughter (X). (Audio here.) She will be our guide for a day in Beijing and has asked me to lecture at Peking University, but I can’t stay until September. Ugh. 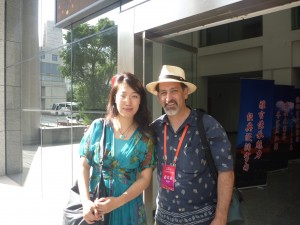 Sun took a photo of me after the reading at the Qinghai-Guide National Geological Park, which has been open for less than two years. 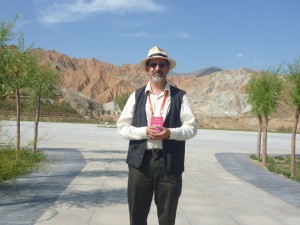 Mer (who did almost all the photos you’re going to see) got a magnificent one of the mountains in Guide County. 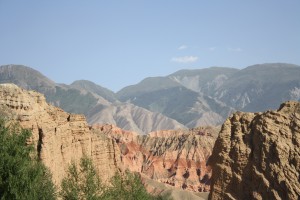 We have certainly been off the beaten path, from the mountains in Guide County, to the huge and magnificent Qinghai Lake. And many other nearby holy sites, including Kum Bum Monastery, more photos to come here, or on our Facebook page, which we cannot access here.

And don’t even get me started on the Chinglish we’ve encountered. It’s inspired many an American Sentence, to be revealed later.  Here’s a sneak preview: 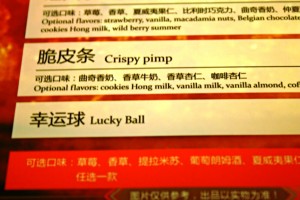