We’re down to two last Living Room writer’s critique circle sessions in Columbia City. Early returns on the outreach we’re doing suggests that, while the current SPLAB is a lovely and intimate space, it is out of the way for most people who would attend SPLAB events so, barring a miracle of collective action, the SPLAB tenure in Columbia City ends with a bang on June 26. (If you are interested in being involved in SPLAB’s future, which will continue (stay tuned for that) we are interested in Board Members. 100 Thousand Poets for Change, the Cascadia Poetry Festival and the digitization of SPLAB archives are three current projects. Contact Paul Nelson if you would like to be more involved in SPLAB’s future activities.)

Next week, we’ll have a special Living Room, where we won’t critique work, but we’ll celebrate & create Personal Universe Decks, along the lines of Michael McClure’s notion from a 1976 Naropa workshop. Feel free to bring something to drink or eat. We’ll have some snacks and drinks for the gathered (than you Tutta Bella) and we’ll create our own decks for aiding our own compositions. 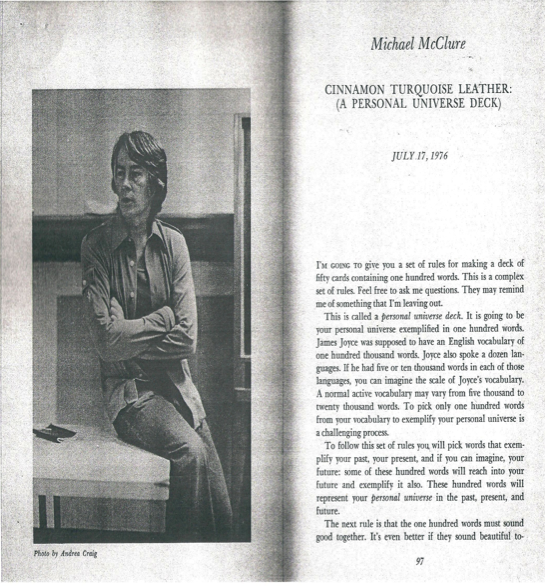 Living Room happens @ SPLAB in the Cultural Corner at 3651 S. Edmunds. (Look for the SPLAB sign on the wall and come inside.) We’re 2 blocks from the Columbia City Link Light Rail Station.