The first Rainier Valley Lit Crawl happened Sunday, March 8, 2015 and the second one is to happen later this month. Jeanne Morel, Ra’anan David and Barbara Erwine are the curators. All three were active at SPLAB when we had our venue in Columbia City. 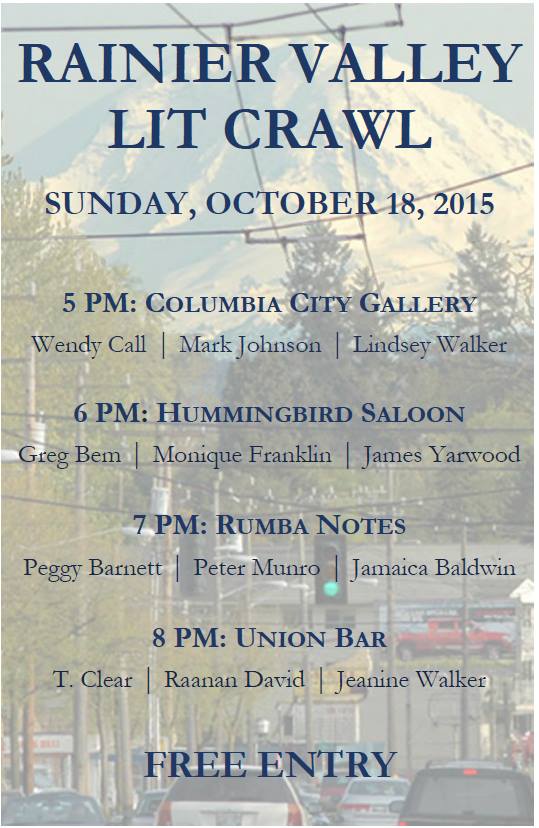 Wendy Call has served as writer-in-residence at more than twenty institutions, including five national parks, three universities, two visual art centers, a historical society, and a public hospital. She is author of No Word for Welcome, winner of the Grub Street National Book Prize for Nonfiction in 2011. She has lived in Columbia City since 2004 and her latest project is a literary, photographic, digital map of Seward Park.

M. S. Johnson: A slow reader, Mark Johnson finds poetry fits his pace, and the good stuff leaves space for thinking between words. Mark is a high school dropout who had a small farm, became a landscape architect, and now writes environmental impact statements. Poetry is his invisible friend. He’s published a couple poems, (thank you Raven Chronicles) and reads his stuff at Hummingbird Saloon (thank you Easyspeak Seattle).

Lindsey Walker is a poet, writer, massage therapist, esthetician, and co-owner of Iðunn Salon and Spa. She is originally from Tennessee. She received her BA in English/creative writing from Seattle University in 2014. Her work has been published a little in print and a lot online, most recently in Goblin Fruit and Fried Chicken and Coffee. She has won a few prizes, including best creative nonfiction at the Northwest Undergraduate Conference for Literature in 2014. When she’s not working or writing, Lindsey is probably drinking bourbon at a punk show, watching excruciatingly terrible movies, or working on her left hook.

Peter Munro is a fisheries scientist who works in the Bering Sea, the Gulf of Alaska, the Aleutian Islands, and Seattle. Munro’s poems have been published or are forthcoming in Poetry, the Beloit Poetry Journal, the Iowa Review, the Birmingham Poetry Review, Passages North, The Cortland Review, The Valparaiso Poetry Review, Compose, Rattle, and elsewhere.

Therese A. Clear – A Seward Park resident for 29 years, T. Clear is a founder of Floating Bridge Press and the Easy Speak open mic series. She has been writing and publishing since the late 1970’s, and her work has appeared in many journals and magazinesincluding Poetry Northwest, Cascadia Review, Fine Madness, and Crab Creek Review, as well as the anthology Light in the Forest, Rain in the Trees: Contemporary Poetry from the Northwest. Her Poem “Repository of the Lost” was recently nominated by the editors of Crab Creek Review for Independent Best American Poetry. She works as the business manager for a Columbia City glass art studio.

Peggy Barnett was born in 1945 and grew up in Queens, New York. She opened a photography studio in 1968 and became a very successful corporate still-life and portrait photographer. She sold the studio in 2006 and moved north of Seattle to the green fields of Maltby, Washington.Peggy knows the Northwest is beautiful, but memories of the past haunt her: the Holocaust, growing up Jewish in an Italian and Irish neighborhood in Queens, the atomic bomb, public school, junior high school, and childhood’s distant happenings arise in her poetry as in a dream. Her mind flits back and forth between the present and the past. The present on the West Coast is always interrupted by the past of the East Coast. Her poetic memoirs “On Your Left” dwell on the specifics of unending change.

Jamaica Baldwin is a third time Seattle transplant from Santa Cruz, California by way of New York City, Boston, and Washington D.C. “Finding a home is like finding the right word for a poem,” she says. “Sometimes you have to try out many before finding the right fit.” Jamaica is extremely happy to be back in the Northwest where she works as a program manager for a non-profit and is an MFA candidate in poetry at Pacific University.

A serial late-bloomer Ra’anan David went back to writing shortly after turning 50, following many years of absence.He is forever grateful for the different writing communities in this city for being so accommodating and forgiving.His self-published poetry chapbook, The Book of JENASOS, is going to be published early next year.Not only he is not French, for some unknown reason he also insists David is indeed his last name