This event made possible with support from 4Culture and Poets & Writers and 4Culture.

Brenda Hillman will give a talk at SPLAB on Friday, November 11 at 7:30, on Innovation and Activism in Poetry.

She has edited an edition of Emily Dickinson’s poetry for Shambhala Publications, and, with Patricia Dienstfrey, co-edited The Grand Permisson: New Writings on Poetics and Motherhood (2003). Included in their list of 50 of the Most Inspiring Authors in the World, Poets & Writers states “[Hillman] reminds us that the language we use when ordering a sandwich is also the language we use to make art. Her environmental concerns prove writers can offer more than just aesthetic pleasure.” Among the awards Hillman has received are the 2005 William Carlos Williams Prize for poetry and Fellowships from the National Endowment for the Arts and the Guggenheim Foundation.

Hillman is the Olivia Filippi Professor of Poetry at Saint Mary’s College in Moraga, California, where she teaches in the undergraduate and graduate programs. She is also a member of the permanent faculties of Napa Valley Writers’ Conference and of Squaw Valley Community of Writers. Hillman is also involved in non-violent activism as a member of the Code Pink Working Group in the San Francisco Bay Area. She is married to poet Robert Hass. Hillman has been increasingly interested in the innovative and experimental lyric traditions, particularly in how the Romantic concepts of nature and spirit have manifested in contemporary poetry.

Brenda Hillman finished off the SPLAB 2011 Visiting Poets Series in fine fashion November 11 and 12 with a brilliant talk on Innovation and Activism in Poetry Friday the 11th (Veterans Day), a workshop that left at least one participant “buzzing all day” and a reading featuring her brilliant new work. One long-time stalwart of the local poetry scene said it was “the best reading I have ever seen her give.”

So, the audio of the reading is here. (Paul Nelson’s intro here.) (Post-reading Q & A here.)

The interview she did with Paul Nelson is here. 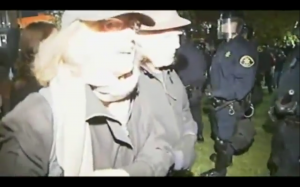 Read about the confrontation she & her husband had with the SWAT team called out to the UC-Berkeley Occupy Rally here.

See video of that confrontation here, with Brenda and husband Robert Haas visible at about the 4:00 mark.

For a woman whose work pushes the art ahead, she surely finds herself in the thick of confronting the injustice of the “American Way.” How many people have so much going on two critical fronts?