Charles Olson, The Principle of Measure in Composition by Field: Projective Verse II, ed. by Joshua Hoeynck
Work from the Olson archive, an important edition to the original Projective Verse essay by Olson.
ISBN 9780925904959
56 pages
$15 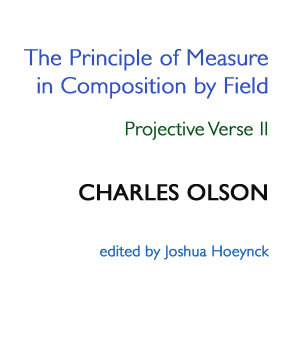 “A poem has so many things to which it must do equal justice if it is to establish its own bounds (be inclusive). They can be summarized (and my intent here is to say it all): atomism (that sounds, at no smallest point ain’t also particles, as both said & heard); continuity (that old flow still flows, even though statement can no longer be an adequate syntax to it – wave is wave of something at all points, both the particle and, because it is a thing, its ‘environment’ – what, its passing through, it is different by as well as what it catches up, what adheres to it); causation (but not that moralistic one – the Coleridgian – of fact & reason; cause in physical sensation, the obverse of which – what lies under it – giving it its allowance at all, that the systematic geometries occur superficially as the face of, cause); memory (than whom there is still no muse more, the more that things, in their retention, put more demand on the poet than merely his ‘own’ material, shall we say); perception (of which the same extension as of memory needs to be emphasized – that the conceptual, no matter how ‘mental,’ and as such the dipolar to perception, still a powerful discrimination is basic, it is this, the actualities have to be felt, while the pure potentials can be dismissed. This is the great distinction between an actual entity (nothing is there except for feeling) and an eternal object (Idea).  A poem is made up of both.”
— Charles Olson,
from “Notes on Poetics (towards Projective Verse II)”